The Role of Imaging in Musculoskeletal Pain 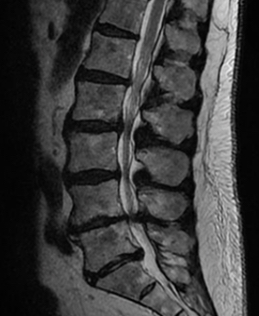 In today’s health care landscape, if you see your doctor for musculoskeletal pain, there is a good chance that you will receive an x-ray. There are certain instances where an x-ray is absolutely justified, for example if you have had a recent trauma or when you have signs and symptoms that indicate an underlying serious pathology.

For everyone else, which is the vast majority of patients presenting with musculoskeletal pain, an x-ray (and likely an MRI if your symptoms persist) often times won’t give you relevant information as to what is actually causing your pain.

Findings commonly seen on x-rays and MRIs, such as degenerative disc disease, spondylolisthesis, and bulging discs, are frequently blamed for a patient’s back pain. Research, however, has told us that we shouldn’t jump to that conclusion too quickly.  This is because a high percentage of people with the aforementioned findings, as well as many others, have actually never had back pain in their life. You can see this for yourself in the following table from the article Systematic literature review of imaging features of spinal degeneration in asymptomatic populations, which included over 3000 individuals from their 20’s to their 80’s who have never had back pain. You will see that findings such as disc degeneration, disc herniations, disc height loss, etc. are very common in patients who have never had back pain, even those in their 20’s and 30’s. 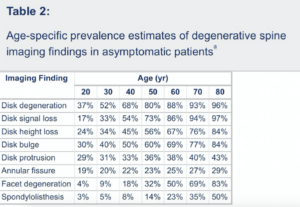 The next question, which should be asked by both doctors and patients who are trying to make good health care decisions, should go something like this: “If these findings are so common in people without symptoms, how do we know if they are relevant in people with symptoms?” The answer to this question is that in the majority of cases, based on looking at the x-ray or MRI alone, we don’t really know if the findings are relevant to a patient’s pain or not. Our technology  hasn’t progressed to the point where our x-rays and MRI’s come with a little flashing red light showing exactly where the pain is coming from. Any conclusion made is a speculation on the part of the doctor or radiologist looking at the image. X-rays and MRIs provide us with part of the clinical picture, but not the whole picture. Take disc degeneration for example. If you gave a the best radiologist in the world the x-rays of two people showing disc degeneration, but only one had back pain, they couldn’t determine who was in pain based on looking at the x-ray alone. It is important to remember that we aren’t talking about a fracture, dislocation, tumor, etc.

In a classic article from the Lancet in the late 1990’s entitled Should radiologists change the way they report plain radiography of the spine?, the authors suggested that when radiologists describe the finding of disc degeneration on x-ray reports they should include the phrase “Almost half of patients with this finding on radiography do not have back pain, so the finding may not be related to patient’s pain.” They emphasized that similar phrases should accompany the findings of spondylosis, spondylolisthesis, Scheuermann’s disease, and others.

It should also be noted that similar conclusions have been found in other areas of the body, where imaging findings and symptoms often don’t go hand in hand, for example in the shoulder (e.g. partial rotator cuff tears), knee (e.g. degenerative findings), and hip (e.g. labral tears).

So where do we go from here? If imaging doesn’t tell us as much as we thought about the actual cause of pain in the majority of patients with musculoskeletal pain, how do we make better decisions regarding their care?

In conclusion, we really need to re-think our use of imaging in non-traumatic musculoskeletal pain. From the unnecessary fear it creates, to the hurdles to recovery it produces, to the large amount of money we spend on it, in many cases imaging does more harm than good. In most cases, treatment decisions cannot be made from an imaging finding. Other methods of assessing and treating musculoskeletal pain, especially the MDT system, yields far more beneficial information regarding the decision making for musculoskeletal pain.