Does the Direction that you Exercise for Musculoskeletal Pain Matter? 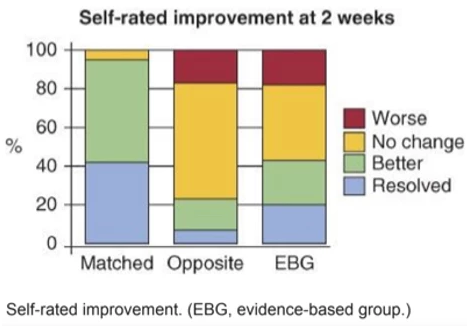 Movement in general is great for people in pain. If you move in the right direction, however, it can make a tremendous difference.

So how do you find this direction?

A McKenzie Method aka Mechanical Diagnosis and Therapy (MDT) Assessment.

Directional Preference is the clinical phenomenon where a specific direction of repeated movement and/or a sustained position results in a clinically relevant improvement in either symptoms and/or mechanics.

A 2004 study looked into this phenomenon of Directional Preference.

Following the exam, all patients who demonstrated Directional Preference were randomized into three groups, receiving either:

· Group 1 – Exercise matched to the directional preference (extension, flexion, side glide, or rotation)

· Group 3 – Evidence-based management, which included advice to stay active, reassurance that they will recover, use of over the counter anti-inflammatory medications

Over 30% of the patients in the Group 2 and Group 3 withdrew because of a failure to improve or because they worsened, compared to zero drop outs in Group 1.

These findings show that proper classification and diagnosis makes a tremendous difference. If you are given the exercise that correlates to your classification your chances of recovery are greatly improved.

The good news is that the McKenzie Method (MDT) is the primary assessment method used in our clinic.