What do my x-ray and MRI findings mean? 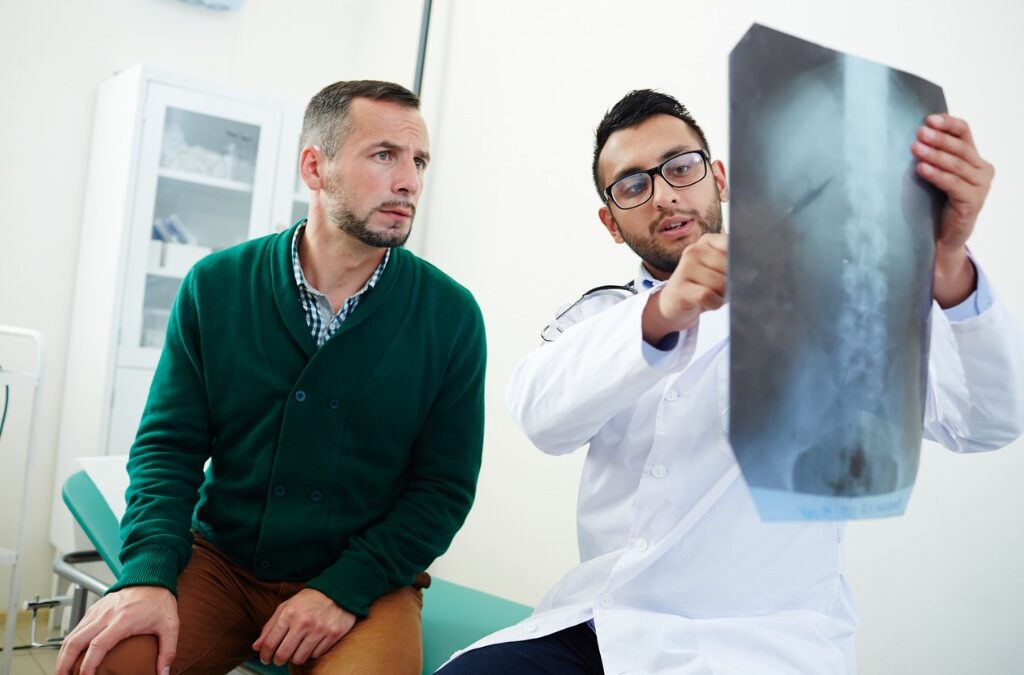 When patients present to their healthcare provider with musculoskeletal pain, there is a good chance that some form of imaging will be taken. More often than not it would be an X-ray initially, but it’s not uncommon for a magnetic resonance imaging (MRI) to follow.

We live in a society that tells us we need an image for everything. If Russell Wilson gets injured, he gets an image within an hour. We feel like this is best for us too, often leading to the belief that a doctor visit is incomplete without an X-ray, MRI, computerized tomography (CT) scan, ultrasound, or some other form of diagnostic imaging.

Many of us have come to believe that these high-tech assessment methods will tell us the reason why we are in pain and that we can use the information to guide treatment and determine prognosis.

What we don’t realize, and what I will outline in this article, is that in most cases there is very little correlation between imaging findings and pain. Contrary to popular belief, pain doesn’t actually show up on MRIs, X-rays, CT scans, etc.

Now before I start, I want to make it clear that the imaging findings I am referring to in this article aren’t what I would consider serious pathology. Serious pathologies include fractures, dislocations, acute, traumatic soft-tissue ruptures, cancer, infection, etc. These require urgent intervention and there is a high correlation between symptoms and imaging findings. I am also not referring to systemic musculoskeletal conditions such as rheumatoid arthritis and ankylosing spondylitis.

What I will be referring to are findings commonly diagnosed on imaging, such as spinal degeneration, non-traumatic rotator cuff tears, disc bulges, bone spurs, tendon lesions, and other conditions we associate with pain.

For years, many professionals in the medical community assumed that if a patient was in pain and they had an ‘abnormal’ finding on imaging, then that finding was responsible for the patient’s symptoms. 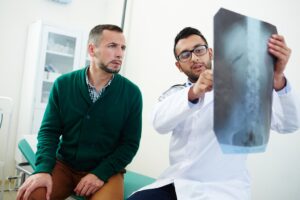 When we started looking at data on imaging findings in asymptomatic individuals, it greatly expanded our understanding of the relevance of these ‘abnormal’ findings. Many such findings, it turned out, have a high false-positive rate, meaning that they often appear in those without symptoms.

This was highlighted in a recent article entitled Systematic literature review of imaging features of spinal degeneration in asymptomatic populations. The study included 33 articles, consisting of 3,110 individuals who had never experienced back pain but had received an MRI of their lumbar spine. The researchers discovered that many findings we have historically associated with back pain, for example disc degeneration, disc bulge, disc height loss, and facet joint degeneration, are commonly seen in those without a history of back pain, especially after the age of 40. It would appear from this article that the presence of these ‘abnormal’ findings doesn’t guarantee that the individual will experience pain.

Similar research has been conducted on extremity joints. When asymptomatic subjects have undergone imaging, ‘abnormal’ findings have been discovered at fairly high rates. Whether it is labral tears in the shoulder or hip, cartilage lesions in the knee, abnormalities in the ligaments of the ankle, or ‘wear and tear’ arthritic changes in many joints, these findings are commonly seen in people without pain.

In one such study, entitled Ultrasound of the Shoulder: Asymptomatic Findings in Men, ultrasound imaging of the shoulder in 51 subjects without shoulder pain revealed some form of abnormality (one or more ‘abnormal’ findings) in 96% of the individuals. Common findings included thickening of a bursa around the shoulder, acromioclavicular joint osteoarthritis, rotator cuff tears or tendinosis and labral lesions. Nearly every person (49 out of 51 subjects) had a finding that would likely be blamed for symptoms if it was discovered in someone with shoulder pain. Keeping that in mind, remember that every person in this study was asymptomatic.

Scoliosis is another condition commonly blamed for symptoms. If you have back pain and it is determined that you have congenital scoliosis (the way your bone structure naturally developed), you will likely be told that this is the reason for your pain. 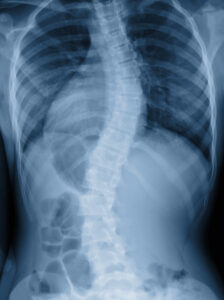 In the article, An epidemiologic study of the relationship between postural asymmetry in the teen years and subsequent back and neck pain, which contained more than 900 subjects, it was shown that those with congenital scoliosis are at no greater risk of developing back pain than those without. Statistics like these demonstrate that scoliosis is not a guarantee that someone will have back pain. In those with scoliosis and pain, perhaps the cause of pain is actually unrelated to scoliosis. We will expand on this point shortly.

Our technology unfortunately hasn’t progressed to the point where X-rays, MRIs and other forms of imaging come with little flashing red lights showing exactly where the pain is coming from. Instead, it is speculation on the part of the person looking at it to try to determine the cause of symptoms. Historically this has meant taking an image, determining the most obvious ‘abnormality’, and blaming the patient’s pain on that particular finding. 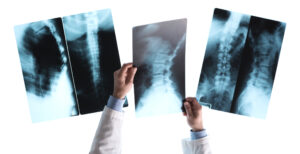 The high rate of false positives demonstrated in research are strongly encouraging us to change the way we interpret and convey these ‘abnormal’ findings to patients.

This was proposed in a 1998 article published in the Lancet, among the most respected and influential medical journals in the world, entitled Should radiologists change the way they report plain radiography of the spine?

The authors of this article recommended that radiology reports of spinal X-rays come with an explanation regarding the interpretation of several common findings. The following is one such example.

They suggested that when advanced disc degeneration is seen on X-ray it should come with the explanation “Roughly 40 percent of patients with this finding do not have back pain, so finding may be unrelated.”

Similar explanations were offered for findings such as Spondylosis, Spondylolisthesis, Scheuermann’s disease, Transitional Vertebra and others. In all of the examples listed in this study, 40-50 percent of patients with a given finding do not have back pain, prompting the authors to assert that these findings may be unrelated to symptoms.

With percentages such as these, your odds of determining whether or not a person is in pain based solely on the fact that they have these imaging findings would be equal to or slightly greater than the odds of landing on tails when flipping a coin. 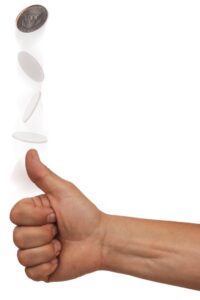 This leads us to the next logical question, “If these findings are so common in people without symptoms, how do we know if they are actually the cause of pain when found in people with symptoms?”

Asked another way, “Are ‘abnormal’ imaging finding the reason for pain in symptomatic individuals, or is the cause of pain something else that can’t be seen on imaging?”

These questions should be asked by every medical professional who treats musculoskeletal pain.

The answer is that in the majority of cases, based on looking at the image alone, we don’t really know.

An excellent quote, credited to radiologist and author Charles Aprill, MD, goes something like this, “An image will tell you the truth, nothing but the truth, but it will NOT tell you the whole truth.”

Ideally, imaging should be used to confirm the findings of a thorough history and physical exam. In most cases, the image shouldn’t serve as the primary decision-making tool in the assessment and treatment of musculoskeletal pain.

Take someone with clinical features of lumbar spinal stenosis, defined as narrowing of the spinal canal. Spinal stenosis patients tend to be elderly and present with leg pain when walking upright or standing for a consistent amount of time. They won’t like bending backwards, but sitting and bending forward will provide relief. These findings would remain unchanged throughout the assessment. In this scenario, imaging should be ordered following the exam, and if it showed lumbar spinal stenosis, it would confirm the clinical hypothesis.

On the contrary, if you took an image of someone and it showed lumbar spinal stenosis, yet they did not have pain when walking, standing, or bending backwards, but sitting and bending forward increased their pain, then the finding of stenosis would likely be irrelevant to their pain. In other words, the reason for symptoms would be different than the imaging finding. It would be a false positive. If this patient was treated for spinal stenosis, it would be incorrect and ultimately ineffective. On the other hand, if this patient received the proper treatment, guided by their most important clinical features, they could make a full recovery, become asymptomatic, and would still have finding of spinal stenosis on imaging.

This is just one example, and a fairly common one at that, where imaging doesn’t actually show the cause of symptoms. There are many more just like it that routinely get misinterpreted and ultimately mistreated.

Thankfully, most patients with musculoskeletal pain don’t require imaging to guide or confirm diagnosis and treatment. In these situations, an image may actually lead both patient and clinician astray (like the second spinal stenosis example listed above) rather than provide them with relevant information.

It is important that we begin to view radiological imaging in its proper light. Many imaging findings deemed ‘abnormal’ are actually unrelated to the patient’s problem and should be viewed as normal age-related changes, no different than the gray hairs on your head. Until they are proven as the cause of symptoms, we can stop referring to these findings as ‘abnormal’. 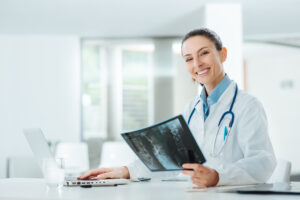 Smiling confident female doctor sitting at office desk and examining a patient’s x-ray, she is looking at camera

This is very important, as these potentially irrelevant findings can lead to unnecessary fear and possibly even disability in patients, especially when they are told things like “You have a bulging disc,” “You have spondylolisthesis,” or “You have a heel spur,” without any other explanation.

Once we change our perspective, it will lead to improvements in the diagnosis and treatment of musculoskeletal pain, ultimately resulting in better outcomes and cost savings.

While the information in this article does not substitute for medical advice, I hope that it will help you improve your ability to make healthcare decisions and ask more informed questions. We should be getting smarter about the treatment of pain, and that includes putting imaging in its proper context.

This article was originally published in West Sound SportsPlus on June 29, 2021.