I was told it’s my Sacroiliac Joint… 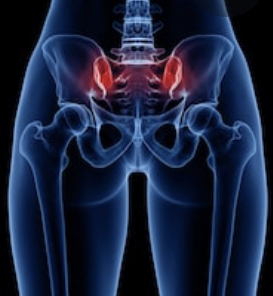 Theories surrounding the anatomical tissue source (the culprit) of lower back pain has been debated among medical professionals for centuries, if not longer. One of these culprits, especially popular among chiropractors and osteopaths, has been the sacroiliac (SI) joints. According to some sources, the SI joints are responsible for up to 30% of lower back pain.  This is a pretty sizable percentage, however in recent years the number has dropped to 7-13% when more accurate methods of determining the tissue source of a patient’s pain have been conducted. The gold standard for determining if the SI joint is at fault is through injecting anesthetic into the joint, and if the pain is eliminated then it is thought to be the culprit. Researchers often do this twice, or by using different time released anesthetics in order to decrease the rate of false positive tests and lessen the chance of a placebo effect.

The SI joints are held together by some of the strongest ligaments in the body, and their movement (or lack thereof) has been debated for millennia. Even Hippocrates entered into this debate, and he believed that the sacroiliac joints were only mobile during pregnancy, when the pelvis needs to be able to expand to allow for childbirth. Although different sources cite differing amounts of movement, most agree that there are less than 2mm of movement available in the SI joints, and a little more in women who have had children. The ability to reliably detect normal movement through palpation, therefore, is questionable at best, even in the most experienced clinicians.

To combat this problem, pain provocation tests were developed in order to stress the sacroiliac joints and determine their relevance in a patient’s pain. While individual tests on their own lack sufficient reliability and validity, when used at a test cluster, their reliability and validity increases with each positive test. One such test cluster, containing 5 sacroiliac joint tests, was described by the world renowned researcher and physical therapist Dr. Mark Laslett. In fact, if your chiropractor, osteopath, physical therapist, etc. has graduated from school or taken an evidence based course on the assessment and treatment of low back pain since 2010, there is a high likelihood that they have learned this test cluster.

Even though I hear patients say all the time “I was told that my back pain is due to my sacroiliac joint”, I commonly find that their problem is actually a lumbar spine problem or a hip problem and not actually an SI joint problem. If after exhausting these two areas I find that the SI joint is implicated then I know that the likelihood of it being the tissue source of pain is much higher than if I didn’t rule out the other areas.

The take home point is that true sacroiliac joint problems aren’t as common as once thought, and if the SI joint is treated when the hip joint or lumbar spine are actually the cause of pain then the chances of a favorable outcome is not great. Assessment by a McKenzie (MDT) trained clinician can greatly increase the accuracy of determining which joint to treat and how to treat it, and therefore increase the likelihood of a favorable outcome.